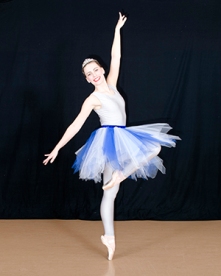 Katie Neumann – Principal & Guest Artist: has been featured in Paquita and the Sylvia Pas De Deux, Katie joined the company as an apprentice member in 2004 after performing for several years with the Jr. Dance Ensemble. She has performed the dual roles of Odette/Odile in DTNW’s SWAN LAKE, Princess Aurora in DTNW’s Sleeping Beauty Pas De Deux, Sugar Plum Fairy, Snow Queen, Dew Drop Fairy, Clara, Arabian and Russian, Chinese and Columbine Doll in DTNW’s annual Nutcracker presentations. She has also been awarded The DTNW Student of the Year Award and multiple scholarships in Dance. Katie has participated in several summer dance camps and intensive training programs at DTNW, has performed as a student guest with the Moscow Ballet of Russia in their Nutcracker, and has also traveled with the company to New York for advanced training. Now back from New York where she was on scholarship/work study at Steps on Broadway and free lance performing, Katie works with DTNW to teach, train and to perform.

Oceana Thunder – Oceana Thunder was promoted to DTNW’s Performing Company in 2018. She joined the Junior Company in 2012, and was promoted to Advanced Junior Company in 2014.  Oceana has performed many featured roles in DTNW original pieces, as well as in the Nutcracker and Sleeping Beauty, including the roles of Sugar Plum Fairy and Princess Aurora. She has also performed corps roles in Swan Lake. Oceana has attended DTNW intensives, and has traveled with the company to New York as part of their advanced dance education program. Oceana studied for and passed her dance captain and teacher assistant certification in fall 2014.  She has been the recipient of multiple May Bell Hansen and Joffrey Ballet Scholarships and has also performed as a student guest with the Moscow Ballet of Russia in their Nutcracker. Oceana currently studies ballet, pointe, partnering, jazz, tap, and musical theater. 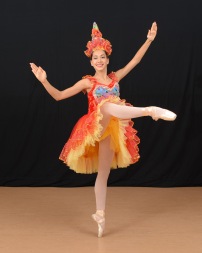 tice Member – Emma Young joined Dance Theatre Northwest’s Jr Ensemble in 2014 and was promoted to Apprentice Company Member in 2018. Emma has performed leading roles including Clara, Harlequin, Columbine Doll, Chinese, Russian and Spanish in the Nutcracker and other featured roles including “Messenger” in community arts performances. She has received multiple scholarships in dance including two scholarships to the Joffrey Ballet Summer Intensive, the Ellida K Lathrop and May Bell Hansen Memorial Fund and has also performed as a student guest with the Moscow Ballet of Russia in their Nutcracker. Emma has participated in several dance education trips to New York City and also assists with some of the dance classes at Dance Theatre Northwest. Emma currently studies ballet, pointe, partnering, jazz, tap and musical theatre at DTNW. 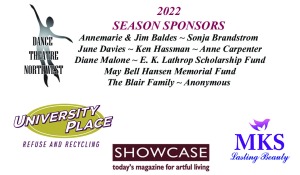 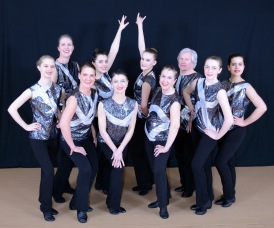